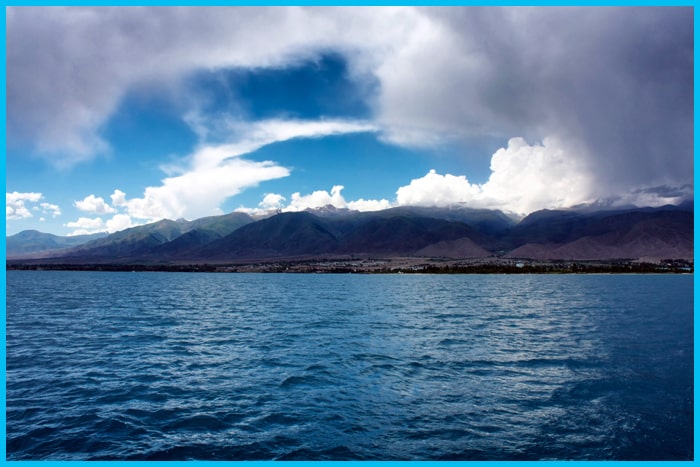 Day 1: Bishkek - Burana - Issyk Kul northern shore
Upon arrival at Manas International Airport you will be met and accompanies you to Bishkek. The road to it will take 4 minutes. Win course of the tour you will visit the most significant sights of the city like Pobeda Square (Victory Square), Duboviy Park (Oak Park), Ńentral Ala-Too Square, Old Square, National Philharmonic and others. After it you will drive to Issyk Kul lake. The lake will impress you with its stunning beauty that is encircled by its mighty mountains. This lake is well known as the second largest alpine lake in the world the altitude of which is 1608 m. above sea level.  It is worthy to be noted that it also has another name- "the pearl of Central Asia".  Moreover you will be amazed by the fact that the lake never freezes and the reason for it is the salty water. On the way you will visit Burana Tower that is also known as  the minaret of 11th century. There is an open air museum of Balbals or stone warriors. The night will be spent in a hotel.

Day 2: Issyk Kul - Grigorievskoye - Semenovskoye - Karakol
In the morning you will have a drive to Karakol town. On the way to it you will have an opportunity to explore such breathtaking sights as Semenovskoye and Grigorievskoye gorges. It is also should be noted that the gorges are connected at the end. Being here you will have a chance to fully enjoy the landscape of this area. You can capture a lot of stunning views. Then in course of the tour you will continue your journey. Upon arrival you will visit the Dungan mosque, which was built without metal ligaments and made in Chinese style and other significant sight known to be old wooden Orthodox Church. Overnight will be in a guesthouse.

Day 3: Karakol - Jeti Oguz - Issyk Kul southern shore - Bishkek
Today your destination is Jeti Oguz gorge also known as Seven Bulls. Upon arrival you will be met by the stunning red rocks formations. Moreover you will have a chance to see the Broken Heart Mountain that possesses a lot of legends and myths. By spending 20 minutes you can hike to the top of the mountain to witness the great view of the gorge. Later on you will continue your travel to Bishkek. On the way to it you will have a stop at Bokonbaeva village. Tours to this place are famous due to the local eagle-hunter or berkutchi. Here you can enjoy the show of traditional hunting that is happening with the help of eagle. This skill passed from generation to generation. After that we will continue our way to Bishkek. Your night is in a hotel.

Day 4: Bishkek - Osh - Dustlik - Margilan - Tashkent
In course of the tour you will have a morning flight in the morning to Osh city. Then you will be transferred to Dustlik border checkpoint where the Uzbek guide will meet you and then arrive to Fergana. The first sight in the tour in Uzbekistan will be excursion in Fergana regional museum. There you will have a great opportunity to explore collection of items from ancient times and learn more about culture and art of Fergana valley. You will be amazed by the fact that this museum possesses more than 80 000 exhibits. Then you will visit the national park of Fergana. Next destination is the Margilan as well as exploring its factor that produce Silk. While being here you will have an opportunity to learn the way of creating silk. The way of creating silk start from the feeding of the silk worms with mulberry leaves, through dyeing with natural vegetal and mineral dyes, to the weaving of the final cloth. This factory will impress you. After it you will be transferred to Fergana train station and board the train. The departure to Tashkent. Afterwards transfer to hotel.

Day 5: Tashkent - Samarkand
The day will star with visiting the major sights of Tashkent. At first you will visit the Independence Square which is known to be the symbol of victory over fascism in World War II. After that you can walk on the local Broadway that divides the Independence square and Amir Timur square. Being here you can't miss opportunity to explore one of the most beautiful metros. The line of it was opened in 1977. Then you will observe sights of the old part of the city. There you will be able you witness such sights as Chorsu Bazaar, Kukaldash Madrasah and Hast Imam complex as well as madrasahs, mosques and mausoleum. And of course the highlighted part of the tour in Uzbekidstan is the world's oldest Quran copy and found in the 8th century. Later on you will have transfer to Samarkand by train. The night will be spent in a hotel.

Day 6: Samarkand - Bukhara
In course of the tour here you will be able to notice that is situated in the valley of the river Zerafshan. Moreover it is also known that the city has similar age as the cities of Babylon or Rome. While being in the second largest city in Uzbekistan you will  visit the most prominent sights of the city like Registan square, Shakhi-Zindeh, Mausoleum Guri Emir and Bibi Khanum Mosque. The Registan Square will impress you by Madrasahs of 15-17th centuries, which attracts travellers form around the world. Then is the mausoleums of the 11th-15 centuries called as Shakhi-Zindeh which is listed to UNESCO World Heritage Site. Bibi Khanum Mosque is famous to it stunning beauty that was made for Tamerlane's wife, when he came back from India. Afterwards you will drive to Bukhara and spend the night in a hotel.

Day 7: Bukhara - Tashkent
In course of the travel you will have a tour to explore the most prominent parts of the city. The tour will start with exploring the most ancient citadel in Bukhara. This sight is known as Citadel Ark of the 4th century. This sight was used as a palace for several dynasties of Bukhara Emirs. After that will be a masterwork of the 9th and 10th century now known as Samanids mausoleum. The tour will continue with visiting Chashma Ayub (Job's well) and Bolo-Hauz mosque, which well known for their forty columns that were built in honor of Bukhara governor Abu-Fayud Khan. Moreover you will have time to walk among shops to buy souvenirs. During the our you will have an opportunity to witness Nodir Divan Begi belonging to Lyabi House Ensemble. It is one of the famous places for travellers. You will end the tour by visiting Poi Kalon complex, the unique architectural art of Bukhara, which has three structures built in the 12th - 16th centuries as Kalon minaret, Kalon mosque and Mir Arab Madrasah. Afterwards you will drive to Tashkent. Overnight is in the hotel.