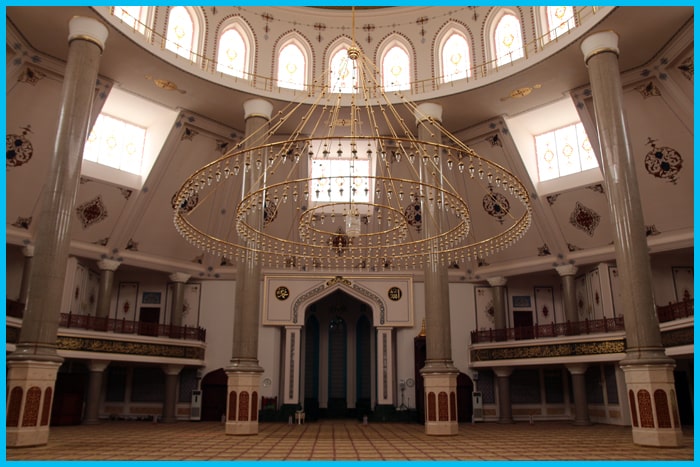 Day 1: Ashgabat
Welcome to Turkmenistan journey! Driver will pick you up and accompany you to the capital of Turkmenistan for sightseeing tour.  In course of the tour you will visit the Ertugrul Gazi mosque that is located in the center of Ashgabat, in Azadi street in the 90-s of the XX century. Due to the location tis site is also known as the Azadi Mosque. It can accommodate about 5,000 people at the same time. You will impressed by the design of this sight that was made in Turkish style. Mosque was named in honor of Oguzkhan Ertogrul - Osman I that is also known as the father of Osman Empire first ruler. Then you will continue your tour in the palace of Happiness that can show you the magnificent panorama view. Near this prominent building you can see a lot of different hotels as well. Don't miss the chance to take a lot of photos. Night is in the hotel.

Day 2: Ashgabat
In course of the Turkmenistan journey 8 you will be transferred to the Nisa ancient fortress. After it you will have to travel to the picturesque underground lake that is known as the Kow-Ata.  The road to it will take 100 km from the capital of Turkmenistan. Upon arrival you will see the road of 60 meters in depth from entrance into the cave. After passing 350 stairs you will see the water of emerald color that has a curative effect due to the sulphur, iodine, magnesium, potassium, sodium, sulphate, aluminium, bromine, iron, stibium - in total 38 elements in the water. It is interesting to note that this lake is one of the largest underground lakes in the world. Then you will travel to the Gypjak Village that is also is the home place of the first president of Turkmenistan. Here you will be able to see one of the biggest mosques of the central Asia. Drive back to Ashgabat. Night is in the city.

Day 3: Ashgabat - Darwaza
Today you will start the tour with visiting the Carpet Museum that is situated in Ashgabat city that was opened on 24 October 1994. Here you will see a huge collection of Turkmen carpets of any museum. You will have a chance to see the exhibits of 20th century with more than 1000 carpets from the 18th and 19th centuries. You can find there antique carpets like articles, chuvals, khurjuns, torba etc. After it is drive to the Darwaza. Overnight is in the tent.

Day 4: Darvaza - Kone Urgench - Dashoguz - Ashgabat
In the morning you will head on to the Kone-Urgench historical site that is located in Dashoguz region. Here you will be able to witness the ancient capital of Northern Khorezm of the first century A.D. It is interesting to know that Arab conquered it in the middle of the 8th century. Due to it the city was renamed as Gurgandzh. Due to it Kone Urgench became the residence of Khorezm Shah and the second-largest city after Bukhara - the capital of Samanid Empire. Then drive to the Dashoguz for transferring in train. Overnight is in the train.

Day 5: Ashgabat
Upon arrival to Ashgabat you will have to travel to the horse farm to see the Ahal-Teke Horses. In the world there are more than 250 breeds of horses cultivated by man over many centuries but Akhal Teke is known as the patriarch of horse-breeding. To produce these excellent racers it takes more than three millenia. It is impossible to say the first appearance but the horse appeared in earliest mentions of the 4th-3rd century B.C. You will be impressed to know that the famous Bucephalus that was the favorite horse of Alexander the Great was Akhal Teke. Later on you will drive to the Gokdepe village where you will witness the Gokdepe fortress that is famous due to the great battle between Russian army and Turkmen tribes. Return to the city and exploring see the Cultural and entertainment center Alem. Tour to Turkmenistan will captivate you by its interesting sights. Night is in the city.

Day 6: Flight
Flight to next destination.

Note: Each Traveler should have 2 photos (5×6) to be presented at the points of entry.