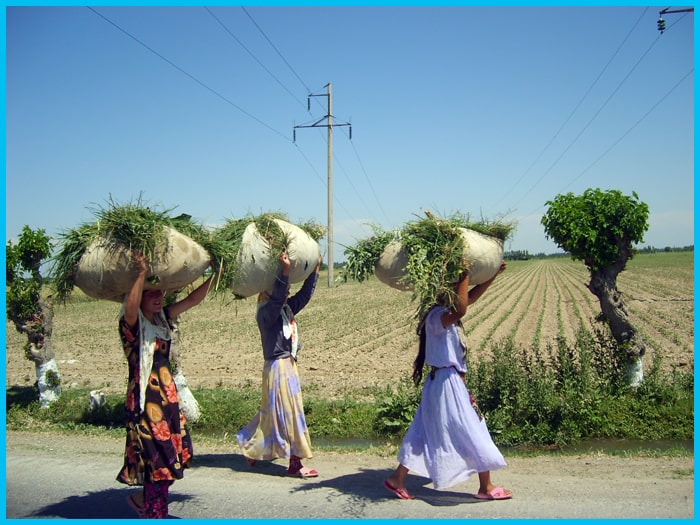 Day 1: Tashkent - Nukus
Welcome to Uzbekistan journey 7! Your tour will start with transferring to the capital of Uzbekistan. In course of the guided tour you will see the Independence square that is also the main square of the country that was built as a symbol of victory over fascism in World War II. After it you will explore the famous local Broadway that divides the Independence square and Amir Timur square. After it you will have a ride in the Tashkent metro that is famed due to being one of the most beautiful subways in the world. The first line of it was opened in 1977. Then is the old part of the city where you can witness the Chorsu Bazaar, Kukaldash Madrasah and Hast Imam complex that consists of several madrasahs, mosques and mausoleum. Here you will be able to see the the sight thattours to which are popular, the world's oldest Quran copy of the 8th c. Quran belonged to Othman Ibn Affan, the Third who lost life by hands of non-muslims in 8th century. You  can witnwss his blood even nowadays on its pages. Evening flight to Nukus. Night is in a hotel.

Day 2: Nukus - Kungrat - Sudochye - Aral Sea
In course of the tour you will have to explore Aral Sea. The road to this site will take 9 hour that will go: Nukus - Kungrad - Plato Ustyurt - Sudochye Lake - Aral Sea. During the way you will have a stop to see the Gaur-Kala Fortress that can be translated as the "fortress of the infidels". This prominent sight was built around the 4th century B.C. and its wall reach the height of 10 meters, are surrounded by the preserved till our days a few strongholds. But as the time passed it is impossible to know that they were. You will arrive to Aral Sea is a little bit before the dusk. Driver will pitch a camp until you explore the surroundings. Tours to this sight will help you to rest. Overnight is in tents.

Day 3: Aral Sea - Muinak - Nukus - Tashkent
During the travel you will have a lot of opportunities to take a bunch of vivid photos that will help you to remember this travel for a lifetime. In course of the tour you will have a drive to the Ustyurt canyon and further to Muinak through the dried bottom of the sea. Upon arrival to the town you will see the perfect example of ecological disaster in the region. Muinak is used to be a prosperous and largest city of Karakalpakstan's port and Aral Sea center of fishery. Moreover here you will have an excursion in the graveyard of ship in ex-shore of the Aral Sea and town museum. After visits drive to Nukus you will have a flight to Tashkent. Overnight is in the hotel.

Day 4: Nukus - Ayaz Qala - Tuprak Qala - Khiva
In course of the Uzbekistan journey 7 you will explore the oldest city in Uzbekistan. Upon arrival to Khiva you will visit fascinating sites that closely connected to the history of the legendary Khorezmshah's State with its capital in Urgench. You will be impressed to know that this city used to be a major trading center in the 10th century on the Silk Road that goes from China to west. Here many centuries ago was possible to see the endless caravans that waited their turn until the gates were opened. This city is well preserved due to which you can enjoy many interesting sights like two famous fortresses: Ayaz Qala and Turpak Qala. Ayaz Qala is an ancient castle of Khorezm that was named in honor of legendary warrior-slave Ayaz that is known as the Turkic folklore hero. This fortress was made in II century AD. Tuprak Qala can be translated as the ‘clay fort', moreover it used to be royal city of Khorezmian ruler Artav. It is considered to be that this fortress was built in 1 or 2-century AD but it was occupied until 6th century AD. Continues wars and invasions exhausted the city and remained it without any sign of life. Night is in a hotel in Khiva.

Day 5: Khiva - Tashkent
You will continue to explore the Khiva and its inner city that is known as the Ichan-Qala. This site is rounded by strong walls and inside of it you will see the centuries old sound buildings, palaces, mosques, Madrasahs, Mausoleums, Minarets, Caravanserais and Bathhouses. Due to all these sight this city became unique city-monument. Here you will be able to see more than 400 traditional dwelling houses and about 60 architectural monuments. Ichan-Qala was announced to be a historical and architectural conservation area in 1969. Moreover you will see the Kunya-Ark fortress of the 17th century, found by Muhammad Arang Khan as well as the Kalta Minor minaret and Tash Khouvli palace, an incredible sample of Khorezm architectural mastership of 1830s. In the evening you will have a flight to Tashkent. Night is in a hotel.